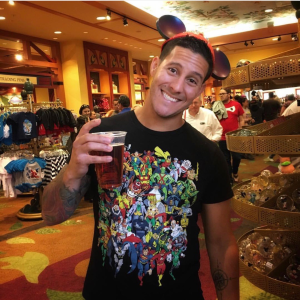 Travel Journal: The One with the Broken Shelf

It was a beautiful day in Florence. The sun was shining, Laurie and I decided to take a walk from our apartment to the Piazzale Michelangelo. We spent the afternoon enjoying the panoramic views of the city and eating gelato. Later that night we ate dinner at a little bistro and enjoyed fresh pasta and local wine. An amazing day in Italy. What could go wrong?

When we returned to our apartment, we decided to catch up on one of our favorite shows on Netflix at the time. We could barely keep our eyes open for one episode and decided to call it a night. We were exhausted. I remembered I had to charge my phone, so I rolled over on my side and reached for the cord that was plugged into the wall.

What happened next could only be described as something from a television show. I guess the extra weight from all the gelato and pasta I had been eating was too much for the floating shelf. As I leaned a little weight on it, the shelf came crashing down to the floor along with me on top of it. Laurie, shot out of the bed as I laid on the floor giggling at my stupidity and the situation I currently found myself in.

Luckily my phone was not broken. My arm was sore. The shelf? On the floor, where it’s not supposed to be, but otherwise intact. I looked up at the wall, at the two little holes where the small screws held the shelf. I proceeded to blame the flimsy materials used to mount the shelf to the wall. Who uses 1/2” screws to mount a shelf!? Cmon! As I attempted to remount the shelf, I realized I wasn’t prepared for this. Not once while I was packing for my 6 month trip did I even think to bring tools. How foolish of me!

So I came up with a plan. Go to the local hardware store, attempt to communicate what I needed and fix the shelf myself. So the next morning, I grabbed a cappuccino, Googled the nearest hardware store and went on my way.

Not being fluent in Italian, or even having a working knowledge of the language, and not being a great carpenter made this task a little challenging. But the gentlemen who worked at the hardware store were more than helpful and I left the store feeling pretty confident I could fix this mess.

I returned to the apartment ready to tackle this project. I told Laurie, not only was I going to fix it, but I was going to make it better than before! ‘Merica! I cleaned the surfaces of debris as best I could, glued the back of the shelf, stuck it on the wall and proceeded to drive in 2” screws through wood with a regular screwdriver. By the end, my forearms throbbed but the job was done. And not only was it fixed but the only way that shelf was coming down again was if the wall came with it!

We enjoyed our last couple of days in Florence being careful not to break anything else in the apartment. We worried for a few days after we left, hoping the host would not contact us saying she noticed the repairs. But we never heard anything and in fact received great reviews from her! So it all worked out in the end.

Have you ever had a mishap like this while traveling? Let me know in the comments!

This site uses Akismet to reduce spam. Learn how your comment data is processed.